Sorry for no announcements, but I love you guys ♥️

There’s no doubt in my mind he did this deliberately. I think pretty much everyone feels the same way.

You can’t tell me Tom Holland did this on accident. He’s spoiled enough stuff that he doesn’t get the benefit of the doubt.

I’m going to say yes to both.

Regarding number 1, they know the Holland can’t keep his mouth shut. He’s a kid. He wants to tell everyone about the cool new stuff he’s doing. The people in the MCU are just getting better about what they share with Holland so he doesn’t ruin anything too major.

Regarding the title, I wasn’t really sure at first. It could easily be the working name of the movie. But I thought the script’s presentation was done so well that there’s no shot it’s not the movie’s actual title.

And this isn’t a spoiler for Avengers 4 because we all know Holland has a second movie. In reality this means little to nothing, other than the fact that it’s cool to know the title.

At first I thought it was timing. All the other Star Wars movies have come out at Christmas, plus most people who like Star Wars could be exhausted from the nerd culture movies that have come out, with Avengers Infinity War and Deadpool 2 coming out right before. But that’s not it because look at what the new Jurassic World is doing. You could argue the Incredibles are another piece of evidence, but keep in mind we’ve all been waiting for that sequel since 2004.

It could be any one of a few things:

I’ll definitely admit to not being excited when I first heard about the movie. I just felt like it was a Star Wars movie we didn’t need. There are several other cool characters (i.e. Boba Fett and Darth Maul) that we know so little about in the films that I’d rather watch. But like I wrote when I reviewed the movie, I was stunned and very impressed by it. Hopefully more people give it a shot before it leaves the theaters.

Disney finally finished up with Fox

I think everyone was about ready to punch the big wigs at Comcast in the face over this.

Disney was forced to pony up some more cash after Comcast put in an all-cash bid for $65 billion. So Disney’s offer went from $52.4 billion in stock to $71.3 billion in cash and stock.

Normally I’d find these type of buyouts meaningless. It’s all about the X-Men. They are the best Marvel property out there, not even close. They haven’t even come close to scratching their potential with the movies. The people at the MCU will get them there.

No, no. This is the product of the “lazy parents” parasites.

No amount of science can lead me to believe this isn’t preventable because I was a kid who loved to play games as a kid and in college and now feel no need to ever play video games.

i certainly enjoy playing them from time to time, but I have no crazed obsession with them. And I LOVED them as a kid. To the point where my parents had to limit the amount of games I played during the week. And guess what, it actually worked!

Try disciplining your kids one time.

Comic Book of the Week

So instead of focusing on a single issue I’d rather highlight DC’s Metal hard cover trade. Normally I wait for the paperback, but I’d heard too many good things about Metal that I had to get my hands on this right away.

And I blew right through it. There are a lot of twists and turns through this and great action. If you haven’t read it, make sure you go grab the hardcover version now or keep an eye out for the paperback.

I’m also in the middle of the Metal: Dark Knights Rising issues and it looks like they’re just as good.

Comic Book cover of the Week

I liked the covers for Infinity Countdown: Black Widow #1 and The Amazing Spider-Man #20, but this week I’m picking one of the titles I read.

This was also the best issue of the series. It’s been an OK mini-series to this point. You could make the case this issue made this series worth while.

And this whole series is the perfect example of how powerful cover art can be. When I saw the cover of first issue I had to get my hands on it right away. It hasn’t been my favorite story, but there’s no doubt the cover art, along with the story art, is impressive. 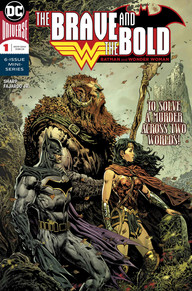